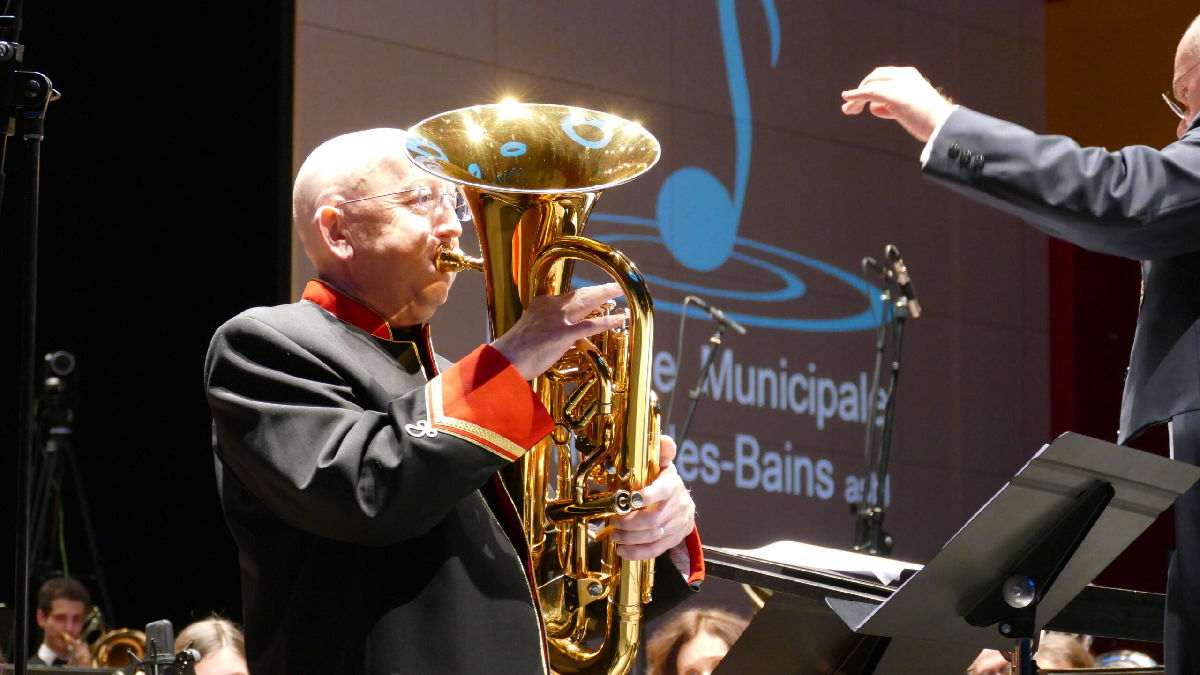 Steven Mead’s performance with Harmonie Municipale Mondorf-les-Bains on 6 January, under the conduction of Olivier Gravier, was a captivating selection of pieces, and incredibly brilliant playing.

Steven is one of the world’s leading and most recorded brass soloists, with some 80 CDs to his credit. In addition to his intense worldwide concert activity, he teaches at the Royal Northern College of Music of Manchester. Mead is in great demand as a recitalist all over the world, and his presence at Casino 2000 of Mondorf-les-Bains as guest soloist in the Harmonie’s traditional New Year’s Concert was an important  acknowledgment for this fine ensemble, in existence since 1920.

The concert opened with Festive Ouverture, composed by Dmitri Shostakovich in 1954. Commissioned for the Bolshoi Theatre’s celebration of the 37th anniversary of the October Revolution, this Ouverture has since become one of the most enduring of Shostakovich’s scores.

After the initial fanfare, the work balances itself between two different themes. A lively one starts in the clarinets, soon followed by the woodwind section. A second theme, much more solemn, is begun in the brass section. These two themes alternate for the rest of the piece, reflecting the structure of an official celebration, in which action is contrasted with solemnity.

Pablo de Sarasate’s Gipsy Airs took the audience into the world of Hungarian dances. Originally written for violin and piano in 1878,  the first piece played by Steven Mead with the Harmonie Mondorf immediately showed off his unbelievably virtuosic and brilliant playing.

The piece opens with an intense cadenza-like introduction, followed by two dance melodies, both bearing well-known Hungarian popular tunes. The final tempo, Allegro molto vivace, is marked by fast, light, bouncy and highly virtuosic passages of the soloist, with a rousing finish and an abrupt halt. The Harmonie was merely accompanying by this point, leaving room for Steven to shine through with a clear, pure tone soaring over the ensemble.

Austrian composer Friedrich Goulda openly flaunted classical music etiquettes and conventions. An unconventional genius and one of the most acclaimed piano virtuoso of the past century, he embraced different musical styles, including jazz, rock music and electronic music. His blurring of boundaries between different musical genres are on full display in his Concerto for Cello and Wind ensemble, scored for a wind ensemble with the addition of a jazz rhythm section of electric guitar, bass and drum set. The New Year’s Concert of the Harmonie Municipale Mondorf-les-Bains featured the second and the first movement (in this order), “Idylle” and Ouverture”.

In the “Idylle”, a spread-out simple melody, folk tunes were first sounded in the brass chorus and subsequently taken by the solois’s euphonium. The “Cadenza” skillfully embedded a variety of musical styles within a virtuoso character, while the “Menuett” opened with a euphonium cantilena accompanied by the electric guitar, played by Michel Wagner . Subsequently, the flute was in conversation with the euphonium, gracefully presenting the musical contrast.

The Overture offered funky and punchy rock moments, in an aggressive bluesy vein, propelled by a driving drum. Steven was equally compelling in the various sections, impeccable in his delivery and especially elegant in the pastiche cameo of the Idyll.

“Somewhere Over the Rainbow” was written for the 1939 movie The Wizard of Oz, and sung by Judy Garland in her starring role. With music by Harold Arlen and lyrics by Yip Harburg, this classic Academy Award-winning ballad has received numerous honours and accolades over the past 74 years, and continues to resonate as one of the most important songs in popular music history. Its inspiring lyrics are also of encouragement and comfort for those facing a difficult time in their life. Steven delivered a sense of elegance and lyricism that breathed fresh life into this well loved classic.

Dutch composer Johan de Meij, born in 1953,  rose to international fame as a composer with his Symphony no. 1 “The Lord of the Rings”, written between 1984 and 1987. The Symphony is based on Tolkien’s trilogy of fantasy. Each of the five movements illustrates a character or event from the Lord of the Rings story. Harmonie Mondorf-les-Bains performed “Hobbits”, the last movement, expressing the carefree and optimistic character of the Hobbits in a happy folk dance, and the determination and nobles of the hobbit folk in a hymn. “Hobbits” closes on peaceful notes, keeping with the symbolic mood of the last chapter (“The Grey Havens”), in which Frodo and Gandalf sail away in a white ship and disappear slowly beyond the horizon.

Rule, Britannia! is a British patriotic song, originating from a 1740 poem by James Thomson and set to music by Thomas Arne in the same year. It is most strongly associated with the Royal Navy and also used by the British Army. Brillante Fantasy on Rule Britannia was commissioned by Peter Wilson for the British Bandsman Centenary Concert in 1987 and was first performed as a duet by Robert and Nicholas Childs. Later reworked as a solo with brass band accompaniment, it has become popular the world over. Steven Mead played it in duet with Thomas Cremmer, a 18-year-old Luxembourgish euphonium student from the Conservatory of Esch-sur-Alzette, in a remarkable mix of sentiment and virtuosity.

Someone to Watch Over Me is one of  the Gershwins’ most iconic songs, written by George in 1926 with lyrics from Ira. The song made its Broadway debut in the smash hit musical Oh, Kay!  Then one day, George started to play the piece at a slower tempo. This tempo change enhanced the sentimental lyrics and brought out a feeling of tenderness and vulnerability that was missing at the faster initial tempo. The soloist’s deep, warm and mellow tone perfectly conveyed the poignant sense of melancholy expressed both by the music and its lyrics and the Harmonie enhanced the mood as well as the timbre of the piece.

With a very appreciative audience of some 650 demanding more, and a standing ovation for Steven Mead, the evening was rounded off by Steven’s solo of Manuel Ponce’s “Estrellita”, and by the Harmonie’s  Telefunken March.